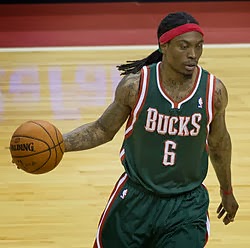 @wiredradio407 had a chance to to interview @wakaflockabsm from BrickSquad Monopoly and @marquis_daniels from the NBA's Bucks.
Marquis Daniels talked about growing up in some of the hardest hoods in Orlando and ending up in the NBA. Daniels is also a hip hop artist. He has collaborated with Trina and Papa Duck, just to name a few. He takes his rap music career just as seriously as he takes playing pro basketball. He introduces his new song on the show.
Waka Flocka is one of the most popular hip hop artists out. A high energy performer he talked about fast his career has taken off. He also discussed the bloodlines that run through the Brick Squad Crew. He discussed breaking up a fans marriage and defined the term "punk rap" that he uses to describe his music! He also discussed the artists that are signed to his record label.
@wiredradio407 airs on 91.5 WPRK ORLANDO/WINTER PARK 1 AM on saturday nights and can also be heard all week on internet stations like, @swurvradio @flex103fm so log on to wired-radio.com for show times and other interviews!
written by @realrebelblack