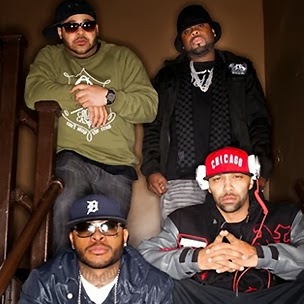 Slaughterhouse announce its "Total Slaughter" Battle Rap tournament and its "Road To Total Slaughter" reality show, set to include Dizaster, Daylyt, Math Hoffa and Arsonal, among others.
Slaughterhouse members have announced their Road To Total Slaughter reality show, slated to feature Dizaster, Daylyt, Math Hoffa, and Arsonal, among others. The series, scheduled to air on Shady's Vevo channel, is set to shine a light on Battle Rap culture.
"Battle Rap is the talk in every street and every barber shop," Joe Budden says in an interview with MTV. "People are really engulfed and seem to be in tune with what these young brothers have to say in the lyrics they're putting out there."
The show is set to follow eight battle rappers as they face-off in a Battle Rap tournament. The matches for the first round are set to include Math Hoffa Vs. Dizaster; Arsonal Vs. Daylyt; Cortez Vs. Marv Won; and Big T Vs. Aye Verb.
Math, Diz, Ars and Day are on one side of the bracket, while Marv, Tez, T and Verb are on the other side of the bracket. The winner from each side is set to co-headline a main event match-up between Loaded Lux and Murda Mook.
"It's probably the biggest battle you can put on right now," Royce Da 5'9 says regarding the battle between Mook and Lux.
The reality show is set to feature each battler in a house.
"They're gonna live with each other for a week and you're gonna be able to see them prepare for [battles] as well," Royce added.
Slaughterhouse members are set to act as the show's producers and the Battle Rap judges for the tournament.
"It's giving these guys a platform that they didn't have before," Royce told Sway. "Everybody knows they're great if you follow them, so the goal is to put not only them, but Battle Rap itself, on this platform."
A photograph of the tournament bracket can be found below.
Posted by Unknown at 1:15 PM