Macklemore on Grammy wins, had advantage due to race #whiterapper

Macklemore says that his four Grammy wins yesterday have both positive and negative aspects.
“It’s the blessing and the curse, a little bit more the curse,” the Seattle rapper said during an interview with New York radio station Hot 97 that was published today (January 27). “First and foremost, Kendrick [Lamar] is a friend of mine. He’s somebody that I love his music and, in my opinion, had the best Rap album of the year. And knowing how the Grammys usually go, I knew that there would be a great chance that we’d win that award and, in essence, rob Kendrick. That’s what happened tonight. It kind of sucks. I think we made a great album. I think that Kendrick made a better Rap album.”
Macklemore & Ryan Lewis won four Grammys yesterday (January 26), including Best Rap Album and Best Rap Song. Macklemore said he knows why he and Lewis were so successful at the award show.
“In terms of the people that are voting on those ballots, filling out those bubbles, we have an unfair advantage due to race, due to the fact we had huge radio success, due to the fact that our name was circulating more in a pocket in the industry of people filling out that ballot,” he said. "This is not like a Rap Radar poll, like a 2DopeBoyz poll. This is not a Hot 97 poll. This is the Grammys. This is many different types of people. All different age groups filling out a ballot where they might not necessarily know the genre.”
Macklemore also explained why he said he felt he “robbed" Kendrick Lamar, in particular, at the Grammys.
“What makes it awkward for me is the fact you never want to be the person that is robbing somebody else,” he said. "I think if you look at what the Grammys are, I think that what people don’t understand is what the Grammys are a bunch of people that are on the Grammy committee or in the industry [that get] a ballot. I got a ballot this year. Now, as I’m filling out the ballot, I’m realizing I don’t know much outside of the genre of Hip Hop in terms of who should get what award. So I’m like, ‘I don’t really know about singer-songwriter or country music or whatever,' but people are filling out bubbles of genres that they don’t know about. And that’s the process of it.” 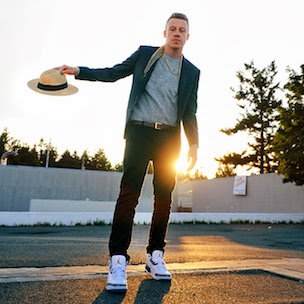