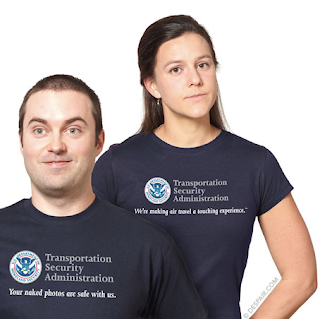 A groundswell of anger has rippled through the nation's airports: People are not happy about the body scanner security systems.
While The Post's Andrea Sachs did not find the procedure too invasive when she tested the new technology ("I found it comforting to know that the body scanner would uncover items missed by older equipment and that we travelers have one more layer of protection against those exceedingly crafty terrorists."), other people have not been so happy with the experience.
Some people are bothered by the idea of a stranger seeing the naked outlines of their body, others worry about the images being stored. Another complaint is that if you opt out of a scan, you're subjected to a pat-down that has gotten a wee too invasive for some folks. "One US Airways pilot said he felt as though he had been "sexually molested" by the pat down," Mike Cleary, president of the US Airline Pilots Association, told USA Today.
Some people are planning a National Opt Out Day for Nov. 24. Fliers are supposed to opt out of having a body scan or not travel at all. The Web site writes, "You should never have to explain to your children, 'Remember that no stranger can touch or see your private area, unless it's a government employee, then it's OK.' "
Meg McLain, a radio host, went on the program "Free Talk Live" and said she had been handcuffed and harassed when refusing to use the body scanners. The Transportation Security Administration released security camera footage that appears to contradict at least some of her claims, as she is not handcuffed in the footage.
The angry fliers have professional support: The unions at American Airlines and US Airways have advised their 14,000 members to avoid the scanners and opt for the pat-downs.
The Electronic Privacy Information Center filed a lawsuit July 2 to stop the installation of more scanners at airports in the United States, saying the procedure was "unlawful, invasive and ineffective."
TSA, meanwhile, contends the body scanners are safe and necessary. "Advanced imaging technology safely screens passengers for metallic and nonmetallic threats including weapons, explosives and other objects concealed under layers of clothing without physical contact to help TSA keep the traveling public safe," an entry on the administration's blog reads.
Click Here for Story Link
Posted by DJ WIRED at 1:02 PM