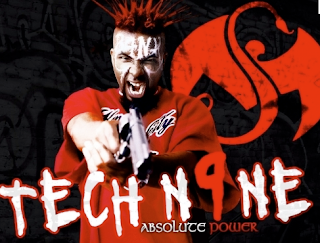 Lil Wayne received a special Rikers Island visit from Midwest emcee Tech N9ne weeks after the Young Money leader revealed his interest in wanting to collaborate with him.


Writing via Twitter, Tech informed his followers of meeting Lil Wayne in Jail.
Last month, Weezy gave his first in-person prison interview with Hot 97 personality Funkmaster Flex. Among the various questions, Flex asked who Wayne was looking forward to working with once he’s released from jail. “Andre 3000 and Tech N9ne,” Wayne answered. Tech N9ne? One person who responded to Wayne’s wishes was Tech himself. Earlier today September 10 the rapper confirmed via Twitter that he’d just come from visiting Wayne hinting at a future collaboration between the pair. “If anybody got anything bad to say bout Wayne, don’t say it to me cause that’s a real n—a I just visited in there” Tech tweeted.
Posted by DJ WIRED at 12:32 PM