NFL players could soon be allowed to use marijuana to treat pain if they are in states where the drug has been legalized for either medical or recreational use, the league's commissioner said last week.
Currently, marijuana is on a list of banned substances prohibited under the NFL's substance abuse program.
However, the marijuana recently has been legalized for medical and recreational use in a number of states, including Colorado, Washington and Arizona. But because the drug is on the league's list of banned substances, players living in those states could face consequences from the NFL even if they are using the drug legally.


'I don't know what's going to develop as far as the next opportunity for medicine to evolve and to help either deal with pain or help deal with injuries but we will continue to support the evolution of medicine,' NFL Commissioner Roger Goodell said in an interview with the Associated Press on January 7.
Marijuana has been approved in several states to treat varying ailments, including chronic pain. Given the addictive qualities of other pain medications NFL players often are given to treat the pain caused by injuries sustained on the field, there is a growing number of people advocating the use of marijuana, which doesn't have the same addictive qualities.


'I would just think that the use of marijuana for pain management, it would be a far better outcome to me than it would be for the abuse of heavy narcotics like pills of [Vicodin] or Percocet  or whatever the pill of choice is for pain in the NFL,' 7-time Pro-Bowler and Super Bowl champion Lomas Brown said on the Morning Show after Goodell made his comments about being open to allowing players to use marijuana.


Due to the physical demands of playing in the NFL, players often suffer painful injuries and are forced to treat the pain with narcotic prescription drugs, on which they can become dependent.
In 2006, then-Dallas Cowboys receiver Terrell Owens overdosed on Hydrocodone.
One player who could benefit tremendously from the NFL allowing marijuana to be used to treat pain is Seattle Seahawks wide receiver Percy Harvin, whose chronic migraine headaches have sidelined him at several points throughout his career. Marijuana, experts say, is highly effective in treating the pain caused by migraine headaches.
Brown adds that he suspects several NFL players currently use marijuana. 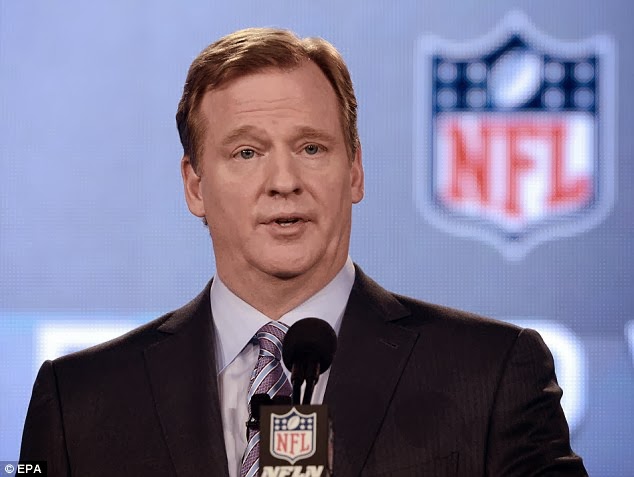 'The NFL, they have to protect their logo, they have to protect their image, but I say at least 50 percent of the players smoke,' Brown says.
For now, however, marijuana is still a banned substance in the NFL. And despite Goodell's comments, the league doesn't appear to be willing to change that any time soon.
'The use of medical marijuana is not permitted and the medical advisers to our joint substance abuse program with the Players Association do not believe it should be permitted,' a league official said in an emailed statement to the website Fusion.net.