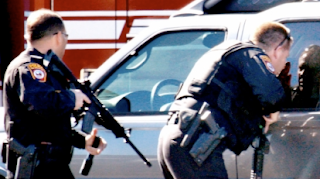 U.S. Representative Gabrielle Giffords was shot in the head and has had surgery following an attack that killed at least six at a public event in her home district in Arizona.
Giffords, a 40-year-old Democrat, was shot point blank in the head during a public event at a Tucson grocery store.
A surgeon at the hospital said Giffords was shot directly through the brain, but is recovering after surgery in critical condition. He said in a press conference that he was "as optimistic" as possible given the injury.
The surgeon said five people were in critical condition following the attack, and a young child had died.
Chief Rich Castigar of the Pima County Sherrif's department said 18 people were shot in the attack.
A witness told CTV News Channel that a judge and a political aide died in the attack. The judge has been identified as U.S. District Judge John Roll by a federal official.
An official said the attack was carried out with an automatic weapon. Local reports say a man was tackled by members of the crowd.
The FBI and local law enforcement are investigating the attack. U.S. Capitol Police say the shooter is in custody. The Associated Press has identified the shooter as Jared Laughner.
President Barack Obama released a statement Saturday saying information is still being learned but Giffords was "gravely injured" and others had died.
Jason Pekau, an employee at a nearby store, heard 15 to 20 shots ring out.
"It was continuous shooting: there was no break," he told CNN. "It sounded like tons of pots and pans falling down around my ears it was so loud."
Pekau said he saw the congresswoman being rushed into a medical helicopter to be flown to hospital and she appeared to be moving slightly.
He said there was no security or police obviously present at the time of the shooting.
Giffords' husband is astronaut Mark Kelly. Kelly was in Houston at the time of the shooting and is travelling by plane to Arizona.
She first was voted into Congress in 2006. In November, she defeated a tea party favourite. Giffords, a moderate Democrat, had drawn ire for her support of the health care bill.
Obama said the shooting was "a senseless and terrible act of violence" that "has no place in a free society."
House Speaker John Boehner echoed Obama's message.
"I am horrified by the senseless attack on Congresswoman Gabrielle Giffords and members of her staff," Boehner said. "An attack on one who serves is an attack on all who serve. Acts and threats of violence against public officials have no place in our society. Our prayers are with Congresswoman Giffords, her staff, all who were injured, and their families. This is a sad day for our country."
Giffords was among 20 Democrats targeted in gun crosshairs in an ad on Sarah Palin's website. Palin has since taken the ad off her website.
In a statement Saturday, Palin said: "My sincere condolences are offered to the family of Rep. Gabrielle Giffords and the other victims of today's tragic shooting in Arizona."

22 Year old Veteran Arrested for the Shooting
Posted by DJ WIRED at 1:26 PM