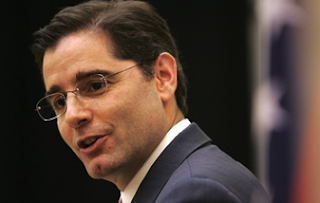 The Federal Communications Commission on Tuesday voted to extend Internet regulation to wireless phone networks for the first time as part of a controversial revamp of "net neutrality" rules that will likely face legal challenges and opposition by GOP lawmakers.
FCC Chairman Julius Genachowski gained the support of the two other Democratic FCC members, while the two Republican appointees voted against the proposal. Undermined by an April court decision that gutted much of the FCC's Web authority, Genachowski aimed to carve out new rules acceptable to Internet service providers on one side and online firms and consumers' groups on the other.
The rules open the door to new revenue-making services for ISPs and give them more leeway to manage data usage on broadband networks.
Mobile Operators Angry
Still, phone companies have been dug in against extending even mild Internet regulation to wireless networks. Verizon Communications(VZ), co-owner of No. 1 mobile operator Verizon Wireless, criticized the new rules and hinted at a possible court challenge.
Verizon had hoped to avoid increased wireless regulation by proposing a net-neutrality compromise with Google (GOOG) in August.
"This assertion of authority without solid statutory underpinnings will yield continued uncertainty for industry, innovators and investors," Verizon said in a statement.
The FCC has had net neutrality "principles" in place since 2005. They require ISPs to treat all Web content sent over broadband networks equally. With Tuesday's vote, Genachowski aimed to formalize rules with more clout, but the agency's legal position is still wobbly because of Comcast's (CMCSA) victory in the April court decision.
The rules govern ISPs, mainly cable TV and phone companies. Genachowski says they will aid the growth of emerging services such as online video and Internet phone calling over wireless networks.
The new wireless Web rules ban ISPs from blocking access to Web sites or competing voice and video applications.
Skype Happy
Internet phone-calling company Skype hailed the FCC's rules.
"We support the Commission's decision that it will not tolerate wireless carriers who arbitrarily block Skype on mobile devices," said Christopher Libertelli, Skype's senior director of regulatory affairs.
Netflix (NFLX) spokesman Steve Swasey said, "The FCC's new rules move in the right direction but didn't go as far as we had hoped."
The FCC seems to be heading in a different direction than Europe's regulators, who have let wireless providers plow ahead with plans to charge Internet firms that gobble up bandwidth.
Posted by DJ WIRED at 9:39 PM