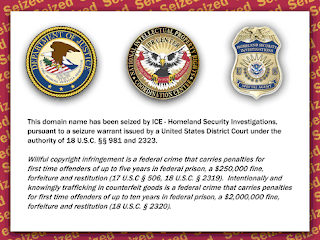 Music sites, torrent-finder.com among those shut down...
Written by enigmax on November 26, 2010
Following on the heels of this week’s domain seizure of a large hiphop file-sharing links forum, it’s clear today that the U.S. Government has been very busy. Without any need for COICA, ICE has just seized the domain of a BitTorrent meta-search engine along with those belonging to other music linking sites and several others which appear to be connected to physical counterfeit goods.


While complex, it’s still possible for U.S. authorities and copyright groups to point at a fully-fledged BitTorrent site with a tracker and say “that’s an infringing site.” When one looks at a site which hosts torrents but operates no tracker, the finger pointing becomes quite a bit more difficult.
When a site has no tracker, carries no torrents, lists no copyright works unless someone searches for them and responds just like Google, accusing it of infringement becomes somewhat of a minefield – unless you’re ICE Homeland Security Investigations that is.
This morning, visitors to the Torrent-Finder.com site are greeted with an ominous graphic which indicates that ICE have seized the site’s domain.
“My domain has been seized without any previous complaint or notice from any court!” the exasperated owner of Torrent-Finder told TorrentFreak this morning.
“I firstly had DNS downtime. While I was contacting GoDaddy I noticed the DNS had changed. Godaddy had no idea what was going on and until now they do not understand the situation and they say it was totally from ICANN,” he explained.
Aside from the fact that domains are being seized seemingly at will, there is a very serious problem with the action against Torrent-Finder. Not only does the site not host or even link to any torrents whatsoever, it actually only returns searches through embedded iframes which display other sites that are not under the control of the Torrent-Finder owner.
Torrent-Finder remains operational through another URL, Torrent-Finder.info, so feel free to check it out for yourself. The layouts of the sites it searches are clearly visible in the results shown.
Yesterday we reported that the domain of hiphop site RapGodFathers had been seized and today we can reveal that they are not on their own. Two other music sites in the same field – OnSmash.com and DaJaz1.com – have fallen to the same fate. But ICE activities don’t end there.
Several other domains also appear to have been seized including 2009jerseys.com, nfljerseysupply.com, throwbackguy.com, cartoon77.com, lifetimereplicas.com, handbag9.com, handbagcom.com and dvdprostore.com.
All seized sites point to the same message.
Domain seizures coming under the much debated ‘censorship bill’ COICA? Who needs it?
Update: Below is an longer list of domains that were apparently seized. Most of the sites relate to counterfeit goods. We assume that the authorities had a proper warrant for these sites (as they had for RapGodFathers yesterday), but were unable to confirm this.
2009jerseys.com
51607.comamoyhy.comb2corder.combishoe.comborntrade.comborntrade.netboxedtvseries.comboxset4less.comboxsetseries.comburberryoutletshop.comcartoon77.comcheapscarfshop.comcoachoutletfactory.comdajaz1.comdiscountscarvesonsale.comdvdcollectionsale.comdvdcollects.comdvdorderonline.comdvdprostore.comdvdscollection.comdvdsetcollection.comdvdsetsonline.comdvdsuperdeal.comeluxury-outlet.comgetdvdset.comgofactoryoutlet.comgolfstaring.comgolfwholesale18.comhandbag9.comhandbagcom.comhandbagspop.comicqshoes.comipodnanouk.comjersey-china.comjerseyclubhouse.comjordansbox.comlifetimereplicas.comlouis-vuitton-outlet-store.comlv-outlets.comlv-outlets.netlv-outletstore.commassnike.commerrytimberland.commycollects.commydreamwatches.commygolfwholesale.comnewstylerolex.comnfljerseysupply.comnibdvd.comodvdo.comoebags.comonsmash.comoverbestmall.comrapgodfathers.comrealtimberland.comrmx4u.comscarfonlineshop.comscarfviponsale.comshawls-store.comsilkscarf-shop.comsilkscarfonsale.comskyergolf.comsohob2b.comsohob2c.comstoreofeast.comstuff-trade.comsunglasses-mall.comsunogolf.comtbl-sports.comthrowbackguy.comtiesonsale.comtimberlandlike.comtopabuy.comtorrent-finder.comusaburberryscarf.comusaoutlets.net
Posted by DJ WIRED at 8:04 AM