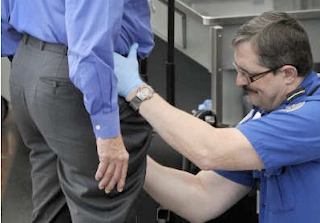 The beleaguered head of the Transportation Security Administration said today that at least one airport passenger screening went too far when an officer reached inside a traveler's underwear, and said the agency is open to rethinking current protocols.
"The woman who checked me reached her hands inside my underwear and felt her way around," she said. "It was basically worse than going to the gynecologist. It was embarrassing. It was demeaning. It was inappropriate."An ABC News employee said she was subject to a "demeaning" search at Newark Liberty International Airport Sunday morning.
That search was against protocols and "never" should have happened, TSA administrator John Pistole told "Good Morning America" today.
"There should never be a situation where that happens," Pistole said. "The security officers are there to protect the traveling public. There are specific standard operating protocols, which they are to follow."
Pistole, responding to complaints from passengers, has said the TSA would not change its pat-down procedures but today said the agency was "open" to changing security procedures.
"The bottom line is, we are always adapting and adjusting prior protocols in view of the intelligence and in view of the latest information we have on how the terrorists are trying to kill our people on planes," Pistole said. "If that means we need to adjust the procedures, then of course we're open to that."
Stay Up to Date on the Latest Travel Trends from ABC News on Twitter
Pistole said the key to travel security is finding the proper balance between protecting against very real threats -- such as the failed cargo bomb plot and the current search for two suicide bombers believed to be at large in Germany -- and protecting individual privacy, something that some passengers claim invasive pat-down procedures have taken away.
In recent days, several passengers have come forward to tell shocking stories about their experiences with TSA officers.
Thomas Sawyer, a bladder cancer survivor, said he was humiliated after a pat down broke his urostomy bag, leaving the 61-year-old covered in his own urine. Sawyer said he warned the TSA officials twice the pat-down could break the seal.
"I was so embarrassed and so petrified of going out into the airport and people would see me and quote unquote smell me," Sawyer said. "My underwear had dropped to the floor and I'm standing there in front of them with my underwear and had to ask to pull it up."
"She put her full hand on my breast and said, 'What is this?' I said 'It's a prosthesis because I've had a breast cancer,'" Bossi said. "And she said, 'You'll need to show me that.'"Cathy Bossi, a long-time flight attendant and breast cancer survivor, said the TSA made her take off her prosthetic breast.
A video of a father taking his young son's shirt off so he can be searched has gone viral online with nearly half a million views in three days. The TSA today released a statement saying that it was the boy's father who chose to remove his shirt "in an effort to expedite the screening" and pointed out that no complaint was filed.
Passengers aren't the only ones calling for a new look at security procedures.
TSA screeners are also fed up with the blame being leveled at them and agree that a better system is needed, according to travel blogger Steven Frischling, who spoke to 20 officers about the new procedures and pat downs.
"The frontline people have significant problems with it," he said. "They feel they are handing suggestions up the chain and they're simply not being listened to."
The screeners told Frischling about their discomfort at touching people's private parts, and getting verbally abused by some passengers.
"I was asked by some guy if I got excited touching scrotums at the airport, and if it gave me a power thrill. I felt like vomiting when he asked that," said one officer. "This is not a turnon for me to touch him -- it is in fact a huge turnoff. There is a big difference between how I pat passengers down and a molester molesting people."
The TSA has attempted to downplay the actual number of people who get pat downs, although Pistole today admitted that he'd dropped the ball when it came to informing the public on what it should expect.
"I wish I could say somebody else was responsible for that, but that was my decision, and it was a risk-based decision," Pistole said at a breakfast with reporters hosted by the Christian Science Monitor. "My concern was because we piloted the new pat downs anyway in two airports, Las Vegas and Boston, that we not publicize that because it would then provide a roadmap or a blueprint to a putative terrorist, who may say OK, I know there's 453 airports around the country."
There's also concern about possible health risks stemming from the new scanners, a fear that the White House today said is unfounded.
"The truth is, you have greater [radiation] exposure sitting in an airplane than you do going through one of those machines," White House press secretary Robert Gibbs said today.
The new scanners and pat downs were introduced Nov. 1, but their impact will be felt the most this week, the busiest travel period of the year.
Posted by DJ WIRED at 1:30 PM