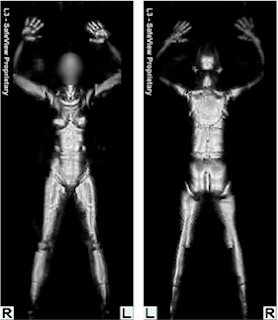 If you were at an airport and you were one of the few to be picked out of line to go through the new full body scans machines, what would you do? Would you go through the new fangled x-ray machine or would you refuse? It looks like the amount of people “opting out” is growing bigger…why? Stories about Big Sis Janet Napolitano and John Tyner are being attention to this new technology. Is it safe?
John Tyner refused to put his body through the machine due to some research he had done before he headed to the airport. And things didn’t go so well when they were going to do one of the “enhanced” body searches.
And Big Sis?  Homeland Securities Janet Napolitano got that nickname recently as being a reference to Big Brother in George Orwell’s 1984.  Napolitano has been claiming that the scanning machines are perfectly safe, but others…they don’t agree.  She said that “They have been independently evaluated by the Food and Drug Administration, the National Institute of Standards and Technology, and the Johns Hopkins University Applied Physics Laboratory, who have all affirmed their safety.” And that they are “are safe, efficient, and protect passenger privacy.” But people reportedly from well respected places as John Hopkins School of Medicine and the University of California at San Francisco believe that they will increase the chance of developing cancer. The UC professor was particularly worried about the machines posing a risk to children, pregnant women and the elderly.
Would you let you or your family go through one of these scanning machines?
Posted by DJ WIRED at 2:11 PM