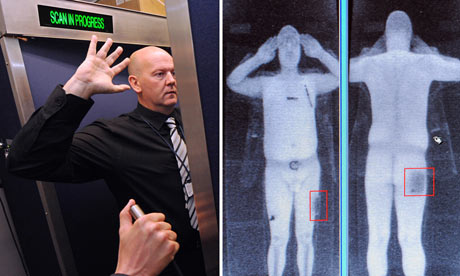 A 12-month trial at Manchester airport of full body scanners only went ahead last month after under-18s were exempted. Photograph: Paul Ellis/AFP/Getty Image
The rapid introduction of full body scanners at British airports threatens to breach child protection laws which ban the creation of indecent images of children, the Guardian has learned.
Privacy campaigners claim the images created by the machines are so graphic they amount to "virtual strip-searching" and have called for safeguards to protect the privacy of passengers involved.
Ministers now face having to exempt under 18s from the scans or face the delays of introducing new legislation to ensure airport security staff do not commit offences under child pornography laws.
They also face demands from civil liberties groups for safeguards to ensure that images from the £80,000 scanners, including those of celebrities, do not end up on the internet. The Department for Transport confirmed that the "child porn" problem was among the "legal and operational issues" now under discussion in Whitehall after Gordon Brown's announcement on Sunday that he wanted to see their "gradual" introduction at British airports.
A 12-month trial at Manchester airport of scanners which reveal naked images of passengers including their genitalia and breast enlargements, only went ahead last month after under-18s were exempted.
The decision followed a warning from Terri Dowty, of Action for Rights of Children, that the scanners could breach the Protection of Children Act 1978, under which it is illegal to create an indecent image or a "pseudo-image" of a child.
Dowty told the Guardian she raised concerns with the Metropolitan police five years ago over plans to use similar scanners in an anti-knife campaign, and when the Department for Transport began a similar trial in 2006 on the Heathrow Express rail service from Paddington station.
"They do not have the legal power to use full body scanners in this way," said Dowty, adding there was an exemption in the 1978 law to cover the "prevention and detection of crime" but the purpose had to be more specific than the "trawling exercise" now being considered.
A Manchester airport spokesman said their trial had started in December, but only with passengers over 18 until the legal situation with children was clarified. So far 500 people have taken part on a voluntary basis with positive feedback from nearly all those involved.
Passengers also pass through a metal detector before they can board their plane. Airport officials say the scanner image is only seen by a single security officer in a remote location before it is deleted.
A Department for Transport spokesman said: "We understand the concerns expressed about privacy in relation to the deployment of body scanners. It is vital staff are properly trained and we are developing a code of practice to ensure these concerns are properly taken into account. Existing safeguards also mean those operating scanners are separated from the device, so unable to see the person to whom the image relates, and these anonymous images are deleted immediately."
But Shami Chakrabarti, of Liberty, had concerns over the "instant" introduction of scanners: "Where are the government assurances that electronic strip-searching is to be used in a lawful and proportionate and sensitive manner based on rational criteria rather than racial or religious bias?" she said.
Her concerns were echoed by Simon Davies of Privacy International who said he was sceptical of the privacy safeguards being used in the United States. Although the American system insists on the deletion of the images, he believed scans of celebrities or of people with unusual or freakish body profiles would prove an "irresistible pull" for some employees.
The disclosures came as Downing Street insisted British intelligence information that the Detroit plane suspect tried to contact radical Islamists while a student in London was passed on to the US.
Umar Farouk Abdulmutallab's name was included in a dossier of people believed to have made attempts to deal with extremists, but he was not singled out as a particular risk, Brown's spokesman said.
President Barack Obama has criticised US intelligence agencies for failing to piece together information about the 23-year-old that should have stopped him boarding the flight.
Brown's spokesman said "There was security information about this individual's activities and that was shared with the US authorities."
Posted by DJ WIRED at 5:55 PM